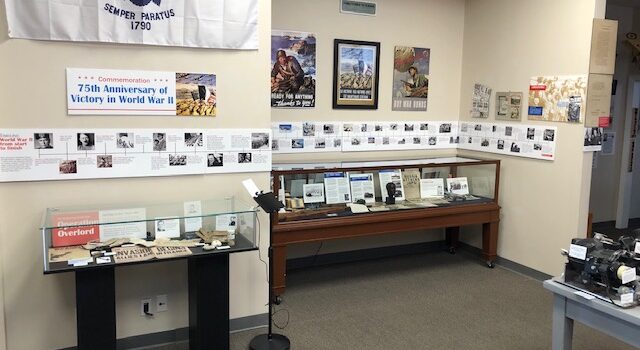 The museum has installed a new exhibit that commemorates the 75th anniversary of the end of WWII and honors local veterans and Colorado companies which played a major role in ensuring the Allied victory.

On display are stories and artifacts related to local D-Day participants such as Robert Rudzinski, a Navy corpsman (medic) who took part in the landings at Utah Beach, Normandy; Coast Guardsman Wil Staub who served aboard a landing craft bringing American soldiers into hotly contested Omaha Beach; and Bob Hilbert, who was a part of the 1st Infantry Division amphibious assault landings at Omaha Beach.

Also honored are airman Bob Caron of Denver, who was the tailgunner on the “Enola Gay”—the B-29 bomber that dropped the atomic bomb on Hiroshima, and sailor Clyde Brunner, who witnessed Japan’s formal surrender aboard the USS Missouri; Brunner later became Broomfield’s second mayor.

Encompassed by a 20-foot-long timeline of the most significant events of the war, the display also highlights the contributions of Colorado companies, such as the Gates Rubber Company (maker of military tires); Schaeffer Tent and Awning Company (which made tents for the military); Coors Porcelain (producers of ceramic insulators required for the atomic-bomb manufacturing process); Coleman Motor Company of Littleton (which produced heavy trucks and cranes); and the Remington Arms Plant in Lakewood (manufacturers of over 6 million bullets per day) — all of which did much to bring about victory.

Also on display are the once-top-secret Norden bombsight that was touted to provde American bomber crews with “precision” aerial bombing capabilities; a brief history of the Holocaust; and the Colorado National Guard’s role in liberating the Dachau concentration camp in April 1945.

It is anticipated that the exhibit will be up until the beginning of 2021.