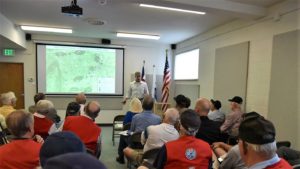 The museum is open and hosting Coffee and Conversation events in a safe and socially distanced manner. However, if you prefer to watch from home, we invite you to tune in via our YouTube livestream.

14 January – Mike Fellows served in the Army for 26 years, including with combat engineer units in Vietnam (25th Inf Div) and Germany (V Corps). His talk is titled, “The Damned Engineers,” will tell the story of the critical role that combat engineers played in frustrating the advance of German forces during the early days of the Battle of the Bulge, December 1944.

28 January – Don Stanton was commissioned through Cornell University ROTC, served aboard a destroyer and aircraft carrier off Vietnam, and flew as a P-3C Patrol Plane Commander. He is a published author and former C&C presenter. The topic for his talk is the unsung story of the Civil Air Patrol during World War II.

11 February – Doug Nunes is a former C&C speaker, and will give a special presentation about the
Unibomber investigation. Following his service in the Army, Doug was a GS-14 Postal Inspector
Supervisor and worked the UniBomber case, off and on, for 14 years. His presentation will show
evidence not seen by the public.

25 February – Tim Hutchinson is the Broomfield Veterans Service Officer will provide a quarterly update to the VA claims process, the new appeals program, and changes resulting from Covid-19. Additionally, he will discuss the New 2022 PACT Act, which is perhaps the largest health care and benefits expansion in VA history. Tim is a Navy veteran having served aboard the aircraft carrier U.S.S. Midway, attached to the US Navy 7th Fleet, from July 1984 to April 1988.

11 March – Lew Moir served 28 years in the US Air Force piloting a wide range of fighters and strategic bombers, including the B-47 and B-52. During the Vietnam war he flew 75 B-52 combat missions with over 280 combat hours. Lew will share a variety of personal “Cold War Stories.”

25 March – Flint Whitlock and John Peticolas will give a special presentation recognizing the
161st Anniversary of the Civil War Battle of Glorieta Pass, March 26-28, 1862, in the northern New
Mexico Territory. This battle has been dubbed the “Gettysburg of the West” by some authors. Both
Flint and John are museum board members, military veterans and prior C&C speakers.

We’d love to hear from you! Please share any feedback with us about these videos at coffeeandconversation@broomfieldveterans.org. We’d also love to hear any suggestions you have for topics and speakers.