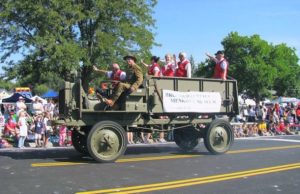 Come watch the parade and then visit the museum for refreshments and special displays! Yearly in September. We look forward to seeing you there!

This annual ceremony honors and celebrates the service of past veterans and current military personnel with speeches, song, and tributes. Held on or near Veterans Day in the City of Broomfield, this event is an honored tradition which is attended by several hundred residents and visitors.

Share in this event by attending this year’s ceremony on Monday, November 11, 2019, at the Broomfield High School Auditorium at 10 a.m.

City and County of Broomfield Memorial Day – Ceremony and  Picnic

This ceremony, held in conjunction with the North Metro Fire Rescue District, retires flags from the community which have been dropped off to the museum and fire department. An official ceremony according to military tradition is held, and flags are retired with the assistance of museum staff, community members, and firefighters.

If you have a flag to be retired, please feel free to drop it off at the museum or watch for official collection times in the Broomfield Enterprise one month in advance of the ceremony.